A LONG WEEKEND JAUNT TO PUEBLA AND CHOLULA

Glenn and I had visited Puebla, the fourth largest city in Mexico, in 2015 but some of our friends from San Miguel de Allende had yet to make the trip so we thought a nice long weekend jaunt was in order.

In order to get there we took a first class ETN bus to Queretero from San Miguel and then a very comfortable Turistar bus directly from Queretero to Puebla. As sometimes happens, our bus for the trip from Queretero was late so we had to wait an hour for the next bus. Since there were available seats it turned out not to be a problem. On the way down to Puebla however there was road construction that had us just about stopped in place and resulted in another 2 hour delay. Needless to say, once we arrived in Puebla and checked into our lovely hotel we were off to find some dinner and a few libations.

We chose Fonda de Santa Clara since it was close to our hotel and they had Chiles de Nogada on the menu. Unfortunately those who chose this item found it to be a bit too sweet for them. There are other places that do this dish much better.

We made Hotel Casa Monarca, a few blocks from the Zocolo, our home for 4 nights and really enjoyed the staff, very comfortable rooms and excellent breakfasts. It had a lovely ambience and a fabulous staircase in the center from which I sang, rather badly and only a short snippet, the song “So Long, Farewell” from the Sound of Music. It is a new hotel, only open since February, but with a long history as it is in a 15th century building. If you decide to stay here please use our affiliate link.

Our first full day we visited the Museo de Barroco in the “new” part of Puebla. Looking a bit like the Puebla answer to the Bilbao Guggenheim on the outside this is an excellent museum for 80 pesos or half with an INAPAM card. If you go on Wednesdays entrance is free. I particularly enjoyed this museum for all of the wonderful interactive displays and we spent quite a bit of time here. Just when you think there is an end to the rooms another crops up.

After we perused the museum rooms to our hearts content we headed over to the giant ferris wheel which was close by. We were hungry by then so stopped at a really nice Italian restaurant called Piacevole just a couple of minutes walk away in the Platinum Center. It offered a great atmosphere and good food although a bit on the pricey side. There are a few other restaurants in this complex so it makes for a nice stop if you are in the area.

We heard that the ferris wheel (Estrella de Puebla) took 30 minutes to complete it’s cycle so I was not super interested in it. BUT, we had 6 people and the cost for a capsule for up to six people was 400 pesos so on I went and was very glad I did it in the end. The view was excellent and we could see the volcano in the distance with steam coming out of it. Warning: if you are afraid of heights the floor of the capsule is glass.

Puebla at night is beautiful, especially around the Zocolo.

We took off to Cholula, Pueblas sister city, on day two and really enjoyed this brightly colored town with the stunning church up on the pyramid (The Shrine of Our Lady of Remedies). The town is known for this great pyramid and hundreds of churches, supposedly one for each day of the year. The climb to the top is a little strenuous but not horrible and you are rewarded with a great view. You can take a tour through the pyramids tunnels but I am very claustrophobic so I gave it a big pass.

The day we went was overcast so we didn’t get the million dollar Instagram photo that everyone wants with the volcano in the back of the church. Bummer. But we still had a great time wandering around this town that was quite a bit bigger than we expected.

We noticed something unusual and that was the abundance of shops selling clothing from India at not bad prices so of course a couple of us had to indulge.

Rompope, a kind of alcoholic eggnog, is big here and we sampled a bit before buying a bottle of our favorite, a pistachio one. Another drink that the area is known for is Pasita, a popular liqueur made from a local, raisin-esque fruit. But try as we did, we simply couldn’t find any place to have one. We settled for a break at Bar Reforma with the dueling walls of photos of Cholulas churches and Marilyn Monroe.

A selection of Rompope

We finished our stay in Cholula with a few drinks and a very good lunch at La Casa de Frida. It is a nice, reasonably priced, large restaurant with some tunes near the Museo Regional Cholula. The upstairs gives you a view of the pyramid and church.

To get around both Puebla and the trip to Cholula we used UBER which was extremely well priced and super easy to use, usually without much of a wait.

Coming back in to Puebla, and after a nice little nap, a snack was needed so we decided on a little upstairs restaurant on the Zocalo called Nevados where there was a nice view but atrocious service and horrible food. Definitely give this a miss.

Our last day in Puebla started at the central Church of Santo Domingo, which is most notable for its over-the-top Baroque-style Capilla del Rosario. It is not huge, but definitely worth seeing as it absolutely drips with gold.

The Puebla Cathedral can’t be missed as it is dominates the Zocalo.

We then took off for the Amparo Museum which is worth seeing. It has a great display timeline on the ground floor which shows what was happening in various areas of the world at the same time in history. It is free for INAPAM holders and is a reasonable 35 pesos entry for others. Free on Sunday and Monday for everyone but closed on Tuesday. There is a permanent collection (Pre-Columbian, colonial 19th and 20th century works) and also changing exhibitions.

A walk down antique street, or rather Alley of the Frogs is short but picturesque and worth a few photos.

Around the corner from the Alley was a great place for a break, La Berenjena, serving delicious pizzas and pastas along with cider, beer and wine.

For our final dinner of the trip we decided a bit of a splurge was in order and headed to Casa Barroca which was a sister restaurant to our hotel. Being here in Chiles en Nogada season a few of our companions enjoyed that traditional dish. All of the food we had was very good and the service was good.

Puebla is known for its Mole and although we did not indulge in it this trip Glenn and I did enjoy some fantastic mole at the bright pink Meson Sacristia de la Compania last time.

There are many other excursions to do in Puebla and the surrounding area that we simply did not have time for this trip so another one will have to be in our future. It was great traveling with some of our best friends from San Miguel and a good time was had by all.

We Are Taking On Travel – Will It Work?

SOME TIME ON THE COAST! SIX NIGHTS IN PUERTO VALLARTA

A VISIT TO IMPRESSIVE UXMAL

A BLOB ON THE BEACH IN ZIHUATANEJO 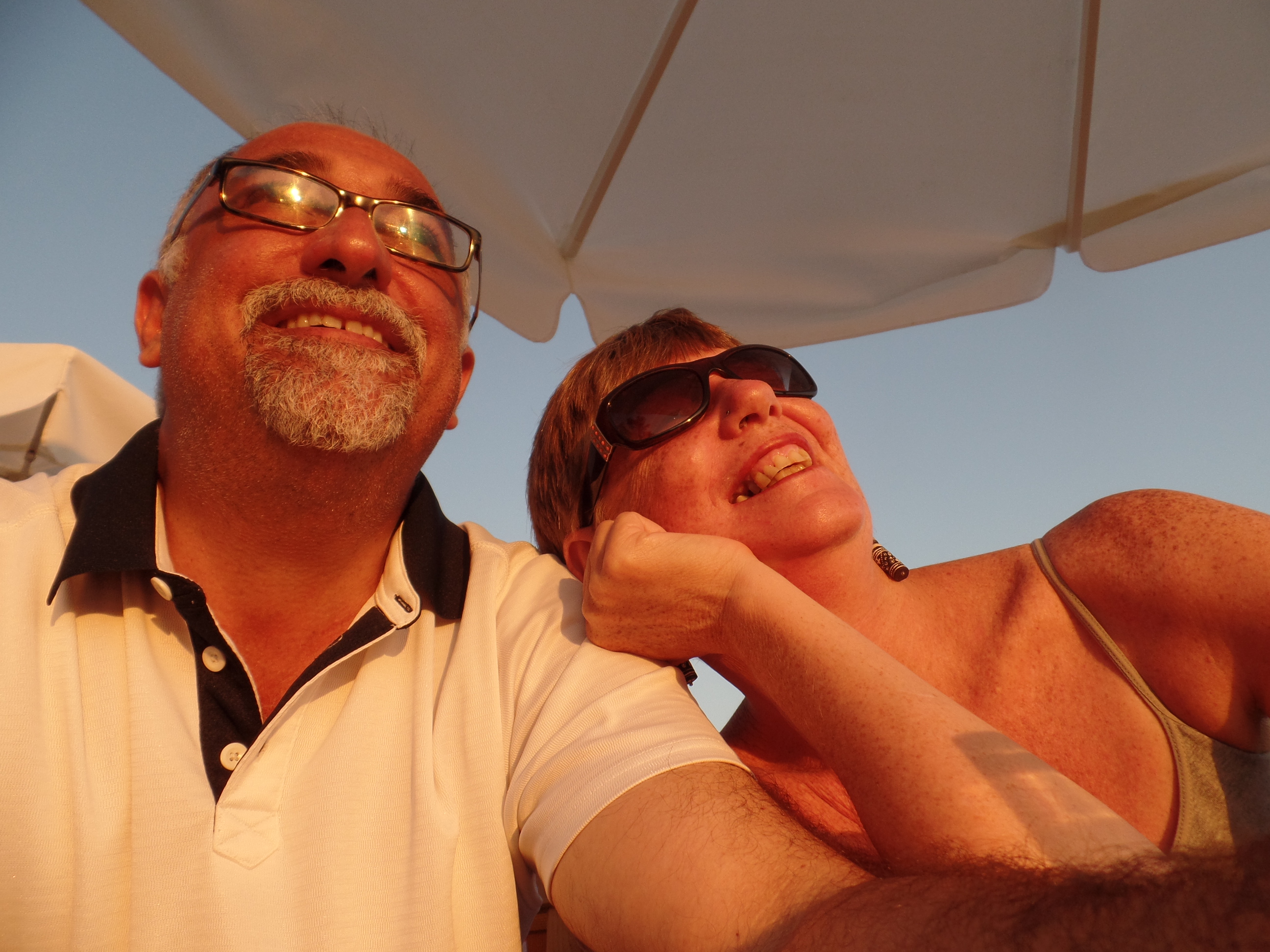 We are Glenn and Ria Talken and we are in what we consider Our Prime Of Life, it is not about age, to us it is about lifestyle choices. We have known each other and been great friends since 1993, have been together since 2013, getting married May 2017. Having spent a good portion of our adult years traveling around the world and working in the travel industry we took the big leap and headed off on new adventures in our retirement years. We sold our house, got rid of everything we owned and planned a course with 6 suitcases in tow. Join us to see what is in store! Continue Reading ...

OUR PRIME OF LIFE - Expat Lifestyle and Travel Blog